The shows of the Inda return to Syracuse with Aeschylus, Sophocles and Euripides 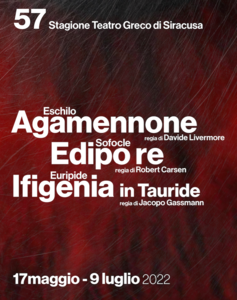 The season of the Inda foundation at the Greek Theater in Syracuse will be inaugurated on May 17 with Aeschylus’s Agamemnon, directed by Davide Livermore in the new translation by Walter Lapini.
From 7 May to 9 July – THEATER SEASON IN SIRACUSA

The 57th season of the INDA Foundation at the Greek Theater will open with the staging of two tragedies, ‘Agamemnon’ by Aeschylus (458 BC) and ‘Oedipus Re’ by Sophocles (415 BC), which mark the origin of the history of the theater and human consciousness. Agamemnon, is the veteran who finds in his home nothing of what he had left and what he expected, arrogant king, with a doomed fate.

Oedipus conducts his search for truth without any limit, giving way to the longest recognition in the history of theater.

Both are caught by the unexpected in the most tragic of ways. And in a different form, the unexpected also dominates the third tragedy scheduled for 2022, Euripides’ ‘Iphigenia in Tauride’, which takes place between unusual places, such as today’s Crimea, incredible turns, sea escape and happy ending.

With this work, the mechanisms of deception and mockery, with Menander and Plautus, break out into the tragedy to give life to modern comedy. The staging of the complete trilogy of ‘Orestea’, namely the chain of revenge of ‘Agamemnon’ ‘Coefore’ and ‘Eumenidi’, and the story of a man, a family and a political cycle beyond history , will close the season.

The season of the Inda foundation at the Greek Theater in Syracuse will be inaugurated on May 17 with Aeschylus’s Agamemnon, directed by Davide Livermore in the new translation by Walter Lapini.

Canadian director Robert Carsen will make his debut at the Greek Theater in Syracuse on Wednesday 18 May with the staging of Sophocles’ Oedipus the King in a new translation by Francesco Morosi.

From June 17, Jacopo Gassmann will make his debut at the Greek Theater, with the staging of Euripides’ Ifigenia in Tauride, translated by Giorgio Ieranò.

On 6 July a replica of Aeschylus ‘Coefore Eumenidi will be staged and on 9 July the complete trilogy of Aeschylus’ Orestea directed by Livermore, co-produced by the Inda and the National Theater of Genoa.

The Inda Foundation will give its audience a marathon dedicated to theater and culture with the staging, in one evening, one after the other, of the three dramas that make up the Oresteia: Agamemnon, Coefore, Eumenidi.

For all information, you can write to ticketetteria@indafondazione.org or call 0931487248